Tornadoes can be irredeemably destructive to any location one strikes. This is why tornado warning signs are extremely important and can often make the difference between life and death. It’s not easy to pick up on the signs of an imminent tornado disaster looming in, but without attention, anyone can be mindful of them and pick some up. 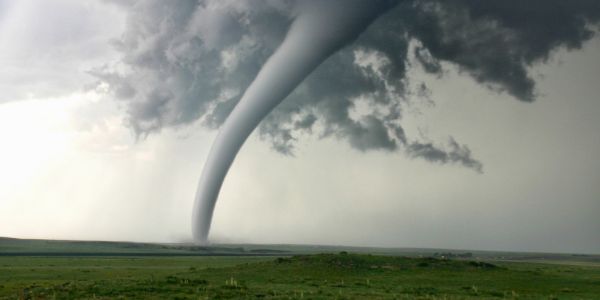 Thus, for the sake of prevention, we’ve compiled a guide that rounds up the most crucial tornado warning signs you should look out for to avoid any grave life endangering moments.

For some, this may sound like an obvious point. For others, this sounds like the beginning of a list of totally pointless tornado warning signs. However, it happens more frequently than you’d believe. Weathermen cast their warnings for approaching tornados and we turn off the TV, perhaps silently hoping that the whirlwind is going to completely circle around us. Couldn’t be more wrong.

Television tornado warnings are usually issued around 13 minutes before a tornado actually strikes a location. Obviously, being a natural disaster and all, it’s not exactly too mindful of hours and minutes, so it tends to hit a certain area significantly sooner. Don’t brush the weather reports off. If you hear a tornado is approaching, barricade yourself. And if it turns out it was a hoax, walk it off and be glad about it.

Also from the “obvious tornado warning signs” category, we have the biggest visual cue of them all: the actual process of a tornado beginning to form. As this happens, a funnel-shaped cloud starts gradually approaching the ground. Pretty much all the time, the cloud that it’s formed from is dark and stormy, so you may also look for patches of really dark clouds in the sky.

There’s not really much to go by with this one since it’s as explicit as it gets. You see a funnel starting to swirl from a thunderstorm, you’ll probably need to get as far away from possible from that place. This becomes even more important the harsher the storm is since that intensifies the strength of the tornado too.

If you’re out and about and you notice the sky suddenly turning a morose, dark shade of green then that might be one of the tornado warning signs we’re telling you about. Admittedly, a green sky doesn’t always equate “approaching tornado” but this is why you should always double-check. Whip out your local forecast for information on weather or any possible impending tornados. Also observe the development of the weather conditions. If it’s stormy and windy, it means bad news.

You don’t always have the fortune (or misfortune, depending on circumstances) of being around to watch a tornado start to unfold. The best way to tell that a tornado that’s already wreaking havoc in its path is approaching is by keeping an eye out for debris clouds.

Debris clouds are noticeable from afar and they will always mark the fact that there is an upcoming danger closing in on your location.

#5 Calmness After The Storm

This might be a bit of a strange one and sort of add to the confusing delicacy of tornado warning signs. After a mighty storm, you may notice the fact that the atmosphere is oozing of a bizarre (even slightly unsettling) silence. Moreover, the skies may be clear as a blue diamond, but, paradoxically, this might indicate the fact that a tornado might soon start to form.

It’s not exactly easy to interpret this sign, but if you feel like everything around you is too still and calm after a storm, you might need to watch the skies and forecasts.

Once a tornado has already shaped up, it’s next immediate step is to move across the area and to cause preposterous amounts of damage in its path. As it approaches a zone, a tornado tends to release a series of thundering noises, which even resemble roars, that shake the skies.

Children in particular fear this “tornado roar” the same way they fear the sound of thunders during storm. If a big tornado is closing in, you can hear the sound from a mile away. Also, we can hear a noise caused by the various picked up objects as they crash and hit against each other.

You’ve managed to read the tornado warning signs and now it’s time for you to prepare for the imminence of it striking the area you’re at. It’s important to take a look around yourself and consider the location you’re at since it opens different kinds of doors and possibilities.

At Home (With Basement)

If you’re at home when a tornado strikes and your house is equipped with a basement, that’s where you should immediately run off to. Barricade yourself in, but make a mental note of where all the heavy objects are located upstairs. In the eventuality of really strong winds, the floor may collapse and you might risk getting crushed under the weight.

At Home (No Basement)

For homes with no basements, the number one tip we can give you is to avoid windows at all costs. Go to the lowest floor in your house and locate a chamber with no windows such as a hallway. Crouch as close to the floor as possible while making sure to protect your head.

Out In The Open

Having to face a tornado in an open field is a terrifying thought, but don’t lose your rationality. If it’s possible, seek out a close by building (it’s the best if it’s a relatively sturdy one) and take shelter there. Should there be no buildings around you, lay flat down on your stomach and protect your head. Stay away from cars and trees.

If you’re at school, follow the protocol procedures and go along with what the supervisors are telling you. For those that are at work, go to the center of the building, find a windowless spot, and engage in the crouched position while protecting your head. In the eventuality of a tornado hit while you’re out on a shopping spree in a mall, locate interior bathrooms and storage rooms. These make fantastic shelters because of their lack of windows.

These windy disasters can strike anywhere, even when you least expect it. This is why you really need to memorize some of these tornado warning signs. A tornado can form surprisingly fast and picking up on what’s happening in time might actually be the deed to save your life. Stay safe and stay wary.