When nature unleashes its fury upon us, it scarcely manages not to take some unfortunate lives too. Some of the worst natural disasters in history have a death toll that rises somewhere in the hundreds of thousands levels. Using this kind of scaling, we scouted history in search for the most damaging natural disasters of all time. 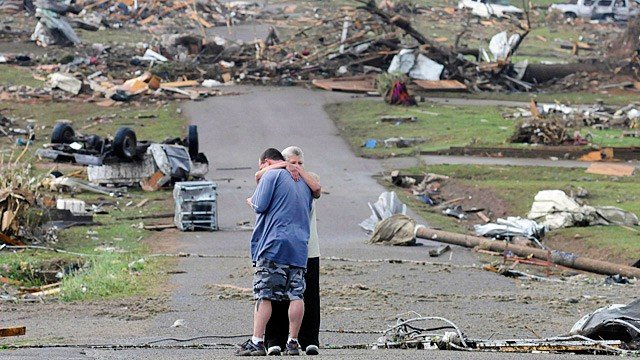 However, instead of ranking them individually, we’ve decided to find the biggest disaster of each category. So, if you’re curious to find out which tornado, earthquake, avalanche, eruption, etc. wreaked most havoc in its path, read ahead for the definitive list of worst natural disasters of all time.

In 1970, Peru was hit by what history now knows by as the Ancash earthquake. The strength of the earthquake led to a destabilization in Mt. Huascaran’s northern slope, which resulted in a grisly avalanche. Afterwards, the landslide advanced at 100 mph toward the villages of Yungay and Ranrahirca. They got buried underneath 80 million cubic feet of ice, rock, and mud which stretched on a territory of approximately 11 miles.

The final death toll of this deadly earthquake and avalanche combo was 20,000 people.

On February 3, 1972 the people in northwestern, central, and southern Iran were hit with harshly low temperatures and severe winter storms. These weather conditions lasted for a whole week, during which several villages got buried underneath as much as 26 feet of snow. The newspaper Ettela’at reported that the city of Ardakan and its surrounding villages suffered the most. In fact, several villages claimed no survivors at the end of the blizzard period, including Kakkan, Kumar, and Sheklab.

The final death toll of the week-long blizzard was 4,000 people.

On November 8, 1970 a cyclone started forming above the Bay of Bengal. It started moving north, making the landfall on the coast of East Pakistan (modern-day Bangladesh) on November 11. At that time, the cyclone was at the peak of its strength, ravaging the territory with winds of over 115 mph.

However, the cause of the biggest damage was the storm surge. It massively hit the low-lying offshore islands of the Ganges Delta. The devastating cyclone completely wiped out several villages, destroyed a great number of crops, and then took many lives.  Upazila, Tazumuddin was the most affected by the disastrous prowess of the storm with nearly half of its population losing their lives in the process.

The final death toll of the devastating Bhola cyclone is estimated to have been around 375,000 people.

The Shaanxi earthquake, as history recorded it, is one of the worst natural disasters in history. It was the third one, to be more precise. An earthquake that struck China during the Ming Dynasty affected over 97 counties in various Chinese provinces. Examples are Shaanxi, Henan, Gansu, and others. The calamity affected a 520-mile long area and the most damage came from the precarious methods of living at the time. The majority of China’s population lived, at the time, in loess cliffs. They were artificial caves that easily collapsed at the impact. This would rightfully explain why the disaster took so many lives despite modern research grading its magnitude with a 7.9 on the Mercalli scale.

The final death toll of the most disastrous earthquake in history was of 830,000 people.

Excluding pandemics and famines, the 1931 China floods stand ahead of the worst natural disasters in history, especially when referring to the 20th century. For several years prior to the floods, China experienced some bizarre climatic behaviors. The country was ravaged by a two-year long severe drought, followed by winters with harsh snowstorms and, ultimately, a massive spring thaw. Therefore, combined with the heavy rains, this raised the water levels of rivers, more specifically the Yangtze and Huai rivers.

The final death toll is still unclear, but most records estimate it to be somewhere between 1 million and 4 million people.

In June 2003, a scorching heat wave spread all across Europe, mostly affecting the Western countries. Then, that same year registered the hottest summer on record since the year 1540. Needless to say, the heat wave unleashed chaos among many of the European countries which had to deal with a major health crisis and considerable crop shortfalls. The most arid period was between July and August that year as a result of a mix between continental hot airs and influence from warm Atlantic waters.

The final death toll of this rampaging heat wave was placed at approximately 70,000 people.

Bangladesh is a known hotspot for tornadoes, but none have managed to cause as much destruction in its path as the Daulatpur-Saturia tornado, one of the worst natural disasters in the country’s history. The tornado was one mile long, traveling across a 50-mile long territory. Therefore, it mostly traversed the slums and poor areas of Bangladesh. It affected the cities of Daulatpur and Saturia most of all.

The final death toll of the world’s greatest tornado disaster was of roughly 1,300 people.

Natural disasters have been wreaking havoc since ancient times and the 365 Crete earthquake stands as proof of that. On July 21 of that year, an earthquake with an epicenter near Crete shook the Eastern Mediterranean countries to the core. It caused great destruction in parts of Greece and Libya, as well as in Egypt, Spain, and Cyprus. More disastrous, however, was the tsunami that followed. Many antique minds at the time wrote about the cataclysm, noting how Libya and Alexandria suffered the most.

Moreover, the second worst tsunami disaster in history happened in 2004 in Sumatra. So, it’s safe to say that we advanced technologically but some things are still the same.

Mount Tambora, located on Sumbawa in the Dutch East Indies (what we know as Indonesia today) erupted in April 1815, leaving its mark on history as one of the worst natural disasters of all time. What makes this particular cataclysm so noteworthy is that its aftermaths affected humanity on a global level.

Historians believe the eruption dropped temperatures worldwide significantly. They believe it stood as the source for the Year Without a Summer from 1816. In the same time period following the eruption, harvest failures increased. The climates all over the world experienced erratic instances of extreme weather.

The final death toll of Mount Tambora’s global-scaled eruption is estimated to be around 92,000 people.

For some reason, many of us have a strange fascination with natural phenomena. But the sheer scale and implications of the worst natural disasters in history are here to remind us just how terrifying they can be.