Have you ever been startled by a snake in your yard? Snakes are among the most misunderstood and feared animals on the planet, mainly because of the poisonous and potentially deadly bite a snake can inflict on its target. The truth, however, is that most snakes in the United States are non-venomous and relatively harmless.

When most people encounter a snake, their natural reaction is to run or become be paralyzed with fear. However, this is not the right approach to take when you encounter the slithery reptile.

Snakes can be dangerous, and before you know how to tell if a snake is poisonous, you first need to know the proper steps to take when you see one. Safety is always the number one priority.

When you are outdoors, it is important to know your environment. This first step is more preventative than responsive. Snakes prefer to remain hidden in areas with tall grass, under logs and under rocks.

When hiking, the best thing you can do to avoid a poisonous snake is to stay on the trail. Snakes are less likely to be hanging out in an open area such as a heavily trafficked trail.

When rock climbing, it is vital to look before placing your hand in a hole. Snakes like to hide in the nooks and crannies of rocky structures.

Being aware of your surroundings is sometimes not good enough to avoid those slithery reptiles. If you encounter a snake, the best thing you can do is to remain calm and not panic. Staying calm keeps the mind clear to make the right decisions.

Also, do not make any sudden movements toward the snake. Try to stay calm so you don't startle the animal, because if the snake were to feel threatened by a sudden movement, it could strike.

Remember, the snake is most likely more afraid of you, and it wasn't out looking for a confrontation with a human.

One of the most effective ways to avoid a snake bite is to not engage the animal, but rather respect their space and walk away. If you cannot turn around to walk in the opposite direction, give the snake plenty of space as you walk around it.​

Remember, you rarely see snakes because they like to remain hidden. If you encounter an aggressive snake that is cornered, don't try to capture it. Just walk away.

Although snakes do not have ears like us, they are sensitive to vibrations caused by disturbances such as sound. Loud sounds can be an effective tool to get snakes out of your path.

You can raise your voice and try yelling at the snake, stomp your feet, or bang sticks together. All of these should produce enough vibrations to encourage the snake to leave the area. 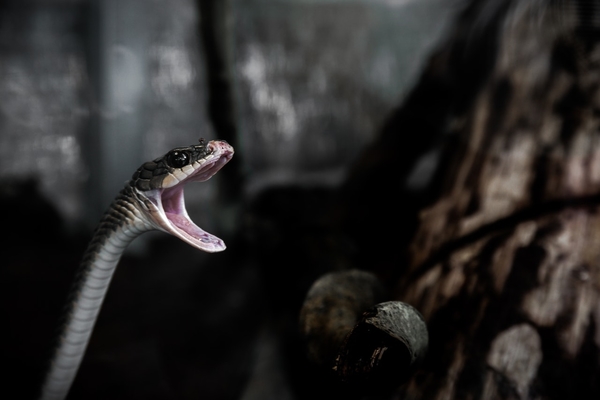 In the unlikely event you are with someone who gets bitten by a poisonous snake, it is important to know what to do until emergency services arrive. The first few minutes after a bite are crucial and can even save a life. Let's learn what to do.

Make sure the snake bite victim remains calm. This can be difficult, but it is crucial. Prevent the victim from moving around. The restricted movement will prevent the flow of venom throughout the bloodstream.

Some common symptoms of a poisonous snake bite include seeing swelling or fang marks on the wound, weakness, fever, and dizziness.

Even if you think a snake bite is minor, it requires medical attention. When you call 911, the dispatcher may direct you to take the victim to the nearest doctor or they may tell you to wait for an ambulance. Try to describe the size, color and other characteristics of the snake to the 911 operator.

This can help determine the correct course of action when treatment begins. All poisonous snake bites require anti-venom to be administered to the victim, and you can call the National Poison Control Center for advice 24 hours a day at 1-800-222-1222.

While waiting for the ambulance to arrive, you can use basic first aid to keep the victim comfortable. To prevent swelling, remove any jewelry or clothing around the wounded area.

Gently clean the wound with a clean cloth and water, but do not flush the wound with water. Apply compression bandages firmly to the wounded limb, making sure not to wrap it too tightly.

About four inches above the wound, keep wrapping the bandages. Do not apply a tourniquet or try to suck the venom out of the wound.

It's important to remember that anytime that you are outdoors, it's possible you will encounter a snake, so take a first aid kit with you since you should always have basic supplies when hiking or camping.

Your first aid kit should include antibiotic ointment, compression bandages, and gauze, and it's a good idea to keep pamphlets with basic first aid kit instructions in it as well. Carry a water bottle with you too as water can be used to hydrate a snake bit victim or used to clean the wounds of someone who has been bitten by a snake.

Always keep your cell phone on your person as you never know when you will need it to call for help.

How To Tell If A Snake Is Poisonous

Although most snakes found in North America are not poisonous, all it takes is one bad encounter with a poisonous snake to put your life in danger.  One of the most important defenses against this is learning how to tell if a snake is poisonous.

Coral snakes are the most poisonous snakes in the United States, and their bites can be fatal if left untreated. Rattlesnakes are easily identified by the rattle at the end of their tail, and water moccasins, also known as cottonmouths, are commonly found in waterways in the southern United States.

Their fangs are hollow so they can deliver the dangerous venom. Bites from pit vipers can cause tissue and muscle damage.

A snake's posture is one way to tell if a snake is poisonous. A snake that is coiled in a tight ball is likely getting ready to strike at a target, and if the snake is coiled and you hear a rattling sound, you have encountered a rattlesnake.

However, snakes can strike from any position. The coiled position allows the snake to strike at the furthest distance, but they can also attack from a stretched position.

Always Stay Away From Rattlesnakes

Hearing a distinct rattling sound is one of the easiest ways to tell if a snake is poisonous or not. Rattlesnakes are found all over the continental United States, but they are most commonly located in the Southwest.

Rattlesnakes are not only found on land, as they are known to be strong swimmers, so be on the lookout if you are near a stream, river, or lake.

What makes rattlesnakes so dangerous are their retractable, hollow fangs, which deliver massive amounts of venom into the bloodstream of their victims. It's safe to say rattlesnakes should be avoided at all costs.

Knowing and studying the most common types of poisonous snakes can help you in knowing how to tell if a snake is poisonous or not. In your spare time, it would not be a bad idea to study up on these commonly found venemous snakes.

Here are the top 10 most common poisonous snakes you can find in all of North America: 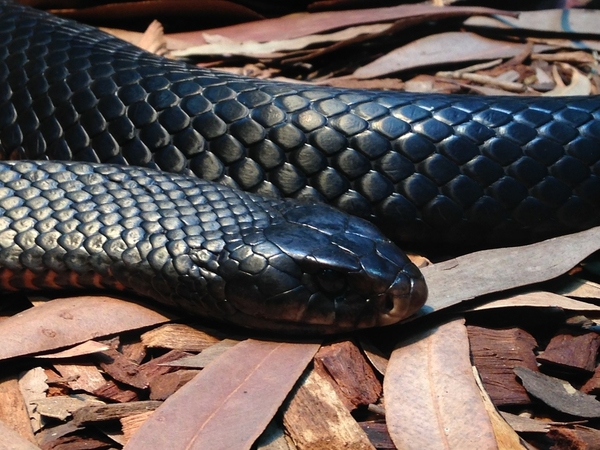 Learning how to tell if a snake is poisonous or not is a vital tool for those who commonly find themselves in the outdoors. Snakes will only strike if they feel threatened, and it's best to know how to avoid them in the first place.

Being prepared and having the proper knowledge about snakes can maybe save someone's life. When they cannot be avoided, it's vital to know how to disengage from the slithery reptiles.