December 26, 2004. Millions of vacationers basked on the warm beaches bordering the Indian Ocean. They never knew that they were about to experience one of the most devastating natural disasters in human history. As vacationers frolicked in the peaceful waves, the water suddenly retreated from the shores as if the entire ocean were inhaling deeply.

Those who understood the answer to the question of “how do tsunamis form” knew that this was the first sign of an approaching tsunami and began to seek higher ground. But sadly for most, their retreat was pointless. Within minutes, the coastal communities of 14 nations were inundated with a wall of water up to 30 feet high.

What Is a Tsunami? 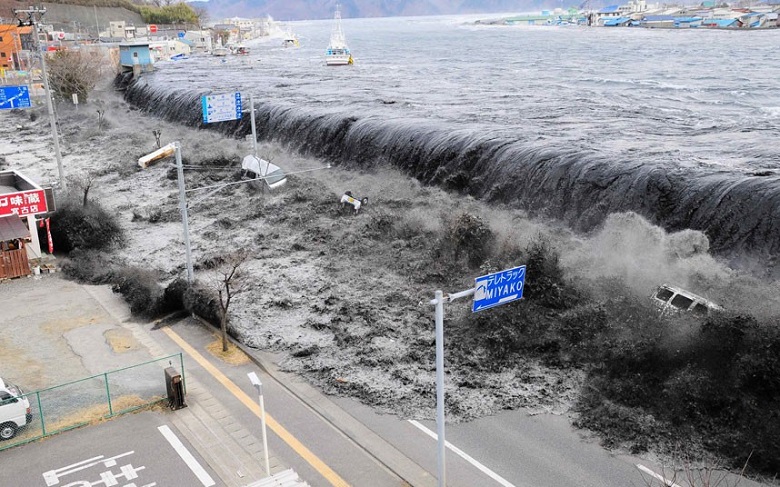 A tsunami is a wave or series of waves in the ocean that are extremely large and fast. These waves can travel across the oceans at phenomenal speeds, up to 550 miles per hour. This is roughly the speed of a jet. When they are far out in the ocean, they are barely noticeable. However, once they begin to crest at a shoreline, they can become very destructive.

How do tsunamis form at shorelines? This happens because tsunami speed is directly related to the depth of water. As a tsunami approaches the shore, the speed of the wave slows down. At the same time, the total energy of the wave remains the same. This causes the height of the wave to grow as the top of the tsunami wave travels faster than the bottom. So, while the wave may be completely imperceptible in the deep waters of the ocean, the destructive energy of the wave releases on shore as it lands.

The energy released in a large tsunami is astounding. It is nearly impossible to calculate precisely. Nonetheless, it’s estimated that the energy released in the 2011 tsunami that devastated Japan was equivalent to nearly 100 nuclear bombs the size of those that were dropped on Nagasaki and Hiroshima. This is an ironic form of measurement since the tsunami caused a crisis at a nuclear power plant in the Fukushima Prefecture that is still devastating the environment today.

How Do Tsunamis Form?

The answer to the question of how do tsunamis form lies in understanding the different forces of nature that can cause them. Tsunamis form due to an enormous amount of water displacement. Most people think that tsunamis only form from earthquakes. However, there are actually several things that can cause a tsunami to form. Anything that disturbs a large volume of water is capable of generating a destructive tsunami. The possible precursors of tsunamis besides earthquakes include:

In each of these cases, a large volume of water is either thrust up or dropped down. This causes all of the water to create a series of waves called a wave train. The waves in this wave train can be up to 60 miles long and as far apart as an entire hour. Because there is often little or nothing in the ocean to interfere with the path of these waves or absorb the energy, they can travel across the entire planet at breathtaking speeds with very little loss of energy. A tsunami wave train can travel across the entire Pacific Ocean in less than one day. 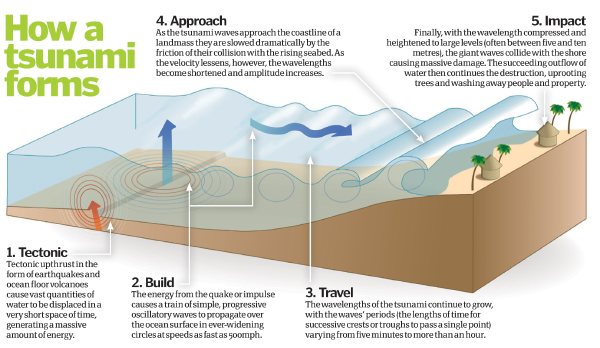 Contrary to popular belief, tsunamis can form in a lake, as well as in an ocean. How do tsunamis form in lakes? Landslides often are the cause. In 563 AD, a massive tsunami occurred in Lake Geneva for this very reason. The landslide was so massive that it caused the resulting wave to race across the lake and inundate the city walls of Geneva. The waves swept over the tops and drowned those who were unable to escape the wall of water. This is one of the more common answers to the question of how do tsunamis form from forces other than earthquakes.

This landslide was triggered by an accumulation of sediment that reached a point so massive it collapsed under its own weight. Aside from meteor impacts, these landslide-triggered tsunamis can be the most violent that nature produces. They can cause tsunamis that dwarf the Boxing Day tsunami in height, if not destructive power over a widespread path.

On July 9, 1958, in Lituya Bay, Alaska, a rockslide – this one actually was caused by a large earthquake – generated a tsunami with a run-up height of over 1700 feet. The force of this tsunami destroyed all of the vegetation in its path. But the loss of life in this tsunami was minimal because it occurred in such a sparsely populated area. In fact, only five people total died that day. A later tsunami in Alaska in 1964 took 119 lives and inflicted over $400 million dollars in damage.

Where Do Tsunamis Occur Most Often? 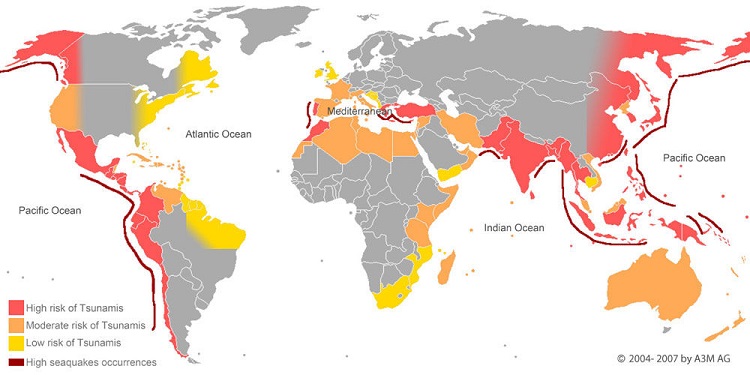 These can trigger particularly violent mega – thrust earthquakes that consist of an upward or downward motion instead of a horizontal wave. This motion almost always produces a wave when it occurs underwater. Nonetheless, it is only strong enough to produce noticeable tsunamis part of the time. Those areas along the Pacific that are most likely to see tsunamis are Alaska, Chile, the Aleutian Islands, Japan and the Philippines.

While tsunamis do occur in the above-mentioned areas most often, they have also occurred in the Atlantic Ocean, Indian Ocean, Mediterranean Sea and elsewhere. So if you live along a shoreline, it is best to fully understand the answer to the question of how do tsunamis form and understand the risk of tsunamis in the area. If tsunamis have occurred in the past, they can and most likely will occur again. Be aware of escape routes and possible warning signs of an approaching tsunami.

Some signs of a tsunami are:

Finally, make sure that you always have an emergency kit. It should contain enough food, medical supplies and fresh water to last from three days to a week. This is because tsunamis can wipe out local infrastructure and power and will likely destroy local water delivery systems. Heeding these warning signs and being properly prepared will help you to be a survivor and not a victim of this powerful force of nature.